Technique vs Strength – What’s More Important In A Fight? 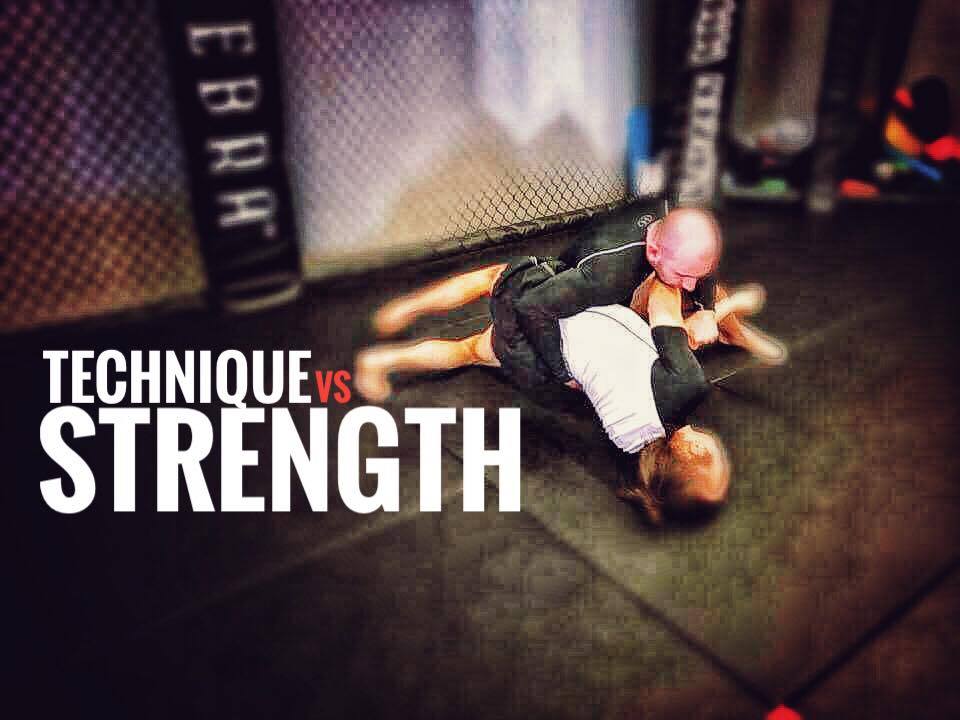 A few weeks back on the MASK Tactical free Facebook group, Mastery of Survival, one of the members created a post that caught my attention. The post sparked a short debate on whether technique was superior to strength. I was enticed to comment on the post but after reading the comments, I felt it would be more beneficial to give my thoughts here.

UFC 1 showed us that technique can beat strength. With the explosion of Brazilian Jiu Jitsu, we know that generally speaking, technique trumps strength. However, just because Royce Gracie won UFC 1, 2, and 4 as the smallest and physically weakest competitor, that doesn’t make this an absolute. With that, I invite you to examine this adage a little further.

One of the members proposed that strategy and tactics outweigh technique. “You can learn hundreds of techniques but if you aren’t being strategic or tactical you won’t ever find the right time or space to use them in.” Another user agreed adding, “if you apply Hick’s law of reaction then the more technique [sic] a person knows the worst [sic] their reaction time is.” There is definitely some validity to these statements. Hick’s law can hinder reaction time, but that is for another post. I will address strategy and tactics later in this post. Before we can analyze this, we first need to define what technique is.

The physical movement versus the underlying principle applies to just about everything. Think about firearms, squeezing the trigger versus jerking the trigger. Both actions fire the weapon. However, the actions are not typically equal in the outcome of where the round impacts. Using other principles such as proper zeroing, sight picture, sight alignment, and a proper positioning/grip will only compound the accuracy of the round. Imagine a highly skilled shooter with a 9mm pistol versus a extremely unskilled shooter with a .50 caliber Desert Eagle. Of course the unskilled shooter can get lucky, but the highly skilled shooter is significantly more likely to land rounds on target. This effectively makes the size of the round irrelevant.

There were some other good points brought up in the post like strategy/tactics and meanness/grit. This falls into what James Yeager, CEO of Tactical Response, calls the survival principles. Essentially, he describes a hierarchy of mindset, tactics, skill, and gear (replace with techniques for this topic). Mindset being at the top of the hierarchy and techniques at the bottom. With that, I have to agree with the commenter. If the person with the greater skill is physically (strength/endurance) and mentally weaker, the opponent will likely triumph. Likewise, equal mindset but one is less technical with better strategy and tactics, he is more likely to succeed.

As you can see there are many factors that will determine the outcome, and this adage is not as cut and dry as we would like it to be. With that being said, when mind and body are equal “Precision beats power and timing beats speed.”*

*Conor McGregor during the post fight interview after his win over Jose Aldo at UFC 194.